Nothing says ‘outback Australia’ more than a clear road ahead, a dust cloud billowing behind and bright sun shining from a cloudless sky. 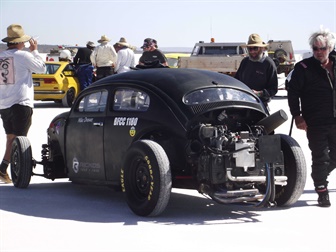 Can it get any better? Yes, it can when Speed Week and Lake Gairdner, one of South Australia’s amazing salt lakes, are on the menu.

Lake Gairdner, some 550 kilometres north-west of Adelaide, is an entry point to the vast loneliness of the Australian outback.

At about 160 kilometres long and 50 kilometres wide it is not Australia’s biggest salt lake but is unique for the fact that one week each year it comes alive to host Speed Week, the Dry Lake Racers Australia annual speed trials with highly-modified motorcycles, cars and trucks lining-up for a chance to reach the vanishing point.

Lake Gairdner during Speed Week has a Mad Max 2 feel to it with tent cities popping-up on the lake’s shores. There is no conflict though and the inhabitants admire each other’s machinery, applaud success and commiserate whenever necessary.

There is also that sacred place known as ‘The Pits’, where the faithful go to fettle their machines, prepare for battle and pray to the Go Fast Gods for ever-higher speeds. 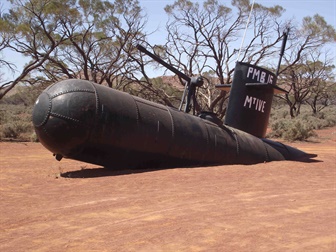 The lake is a comfortable six-hour drive from Adelaide and getting there is easy. The Main North Road becomes the Princes Highway and changes its name to the Augusta Highway just north of Port Wakefield, running through low hills and skirting St Vincent Gulf’s western shore as it runs to Port Augusta, at the northern end of Spencer Gulf.

Bypassing many small towns and with plenty of overtaking lanes along the way, Port Augusta is reached in a little over three hours with Iron Knob another 45 minutes away.

Turning right from the Eyre Highway at Iron Knob – signposted ‘Mt Ive Station’  – launches you onto well-graded and glorious gravel, the type of road my Volkswagen Amarok V6 absolutely relishes.

The landscape becomes a little sparser and that feeling of comfortable loneliness that seems unique to the Aussie Outback sets in.

Mt Ive Station, its gate somewhat oddly marked by a breaching submarine, is 90 minutes away and Lake Gairdner, effectively the station’s northern boundary, is an easy 34 kilometres further on.

The station, the only one in the Gawler Ranges offering accommodation, is an oasis for travellers and, for one week each March, the ‘salt people’. It has powered and unpowered sites for campers and caravanners plus a variety of room types.

Mt Ive Station, its gate somewhat oddly marked by a breaching submarine, is 90 minutes away and Lake Gairdner, effectively the station’s northern boundary, is an easy 34 kilometres further on. 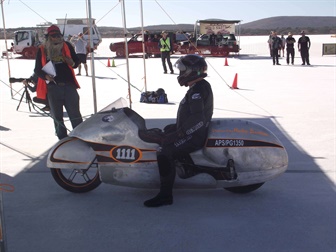 Established in 1864, it is still a working sheep station. Covering just over 101,000 hectares, it runs 2500 sheep. Unusually, it also has two- and four-wheel-drive tracks for visitor adventure driving.

And the breaching submarine at the gate? “A group of workers got bored when they came here and there was nothing to do so they found an old water tank and, well, there it is,” a staff member said.

The noise and bustle at Lake Gairdner is a sharp contrast to the station’s tranquillity.

The sound from a twin-engined record breaker is like corrugated iron sheets being ripped in half by giants and a 13-litre, diesel-engined, hot-rodded truck named ‘The Prospector’ emits a symphonic, thudding rumble as it charges down the salt belching black soot.

‘Rolling coal’, they call it and the rich, dark smoke plume provides a means of tracking the 10-tonne monster disappearing downrange.

The sound from a twin-engined record breaker is like corrugated iron sheets being ripped in half by giants. 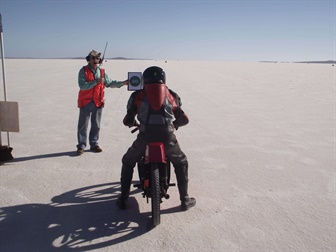 Every competition vehicle is weird, wild and extremely wonderful. There are motorcycles that are metres long, cars made from bomber aircraft fuel tanks, heavily-modified sedans and wild roadsters.

In this topsy-turvy world aerodynamics are everything and weight helps speed. The floorpan of Bob Bowman’s hot rod, for example, is made from 6mm-thick steel plate topped with lead sheet.

“The car weighs about two tonnes,” Bowman says, “the heavier the better but you have to keep it low and aero.” ‘Aero’ helps vehicles move cleanly through the air to achieve maximum velocity.

“Some of the motorcycle riders are a bit beefy,” one observer noted, “but if the muffin tops are aerodynamically sound and part of the overall package then it’s no problem.

Sound identifies vehicles. Single-cylinder motorbikes bark like terriers and four-cylinder race cars yell like kids in a park. The V8s grumble in basso profundo, big-twin bikes have a flat, painful roar and the multi-cylinder motorcycle engines scream like sirens.

When the big engines fire the earth really does move and no one wants to stand too close. Supercharged and turbocharged engines have straps across their cylinder heads in case of internal detonation.

“If one of those engines blows-up the heads can fly off with huge force. They weigh around 50 or 60 kilos and they can do some real damage,” a crew member explained.

There are two race strips for Speed Week, a short one (4.83km) for rookie racers and vehicles with speeds below 241.5km/h and a 14.5km course for vehicles capable of higher speeds or attempting record runs. Of course, with record racing’s American heritage, the language of the lake is definitely imperial. 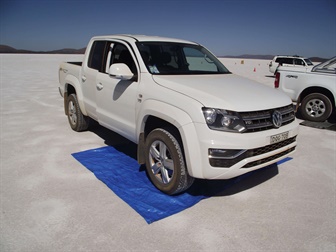 Driving or riding at high speed on the salt is, the racers say, surprisingly difficult.

“You have to forget everything you thought you knew about it and start all over again,” souped-up Volkswagen Beetle racer Glen Torrens said.

Glen ran “124-something” miles per hour (200km/h) as a rookie five years ago and has been trying to find that speed ever since.

“It’s really difficult because the surface keeps changing and just a shift in the wind can drop your speed by 10km/h.

In this beautiful desert landscape the rich white of the salt blends with the blue of the endless sky, the deep ochre soil, the dark, distant, brooding hills and the grey-green foliage of the low-growing trees and bushes to give the place a majestic timelessness which is at great odds to the temporary nature of the noise, colour and excitement of the race machines and their crews.

Lake Gairdner is a deeply spiritual place for its native guardians, the Gawler people, and the racers share that respect, although possibly not for the same spiritual reasons.

But respect is respect and every vehicle is cleaned of dust going onto the lake, cleaned of salt coming off it and parked on tarpaulins to stop anything leaking onto the salt.

And when it’s all over the lake, its desert surrounds and their native guardians settle into somnolence, enjoying the peace and quiet of the changing seasons while they wait for the crazy people and their fast, strange and noisy machines to come back to be tested once again. 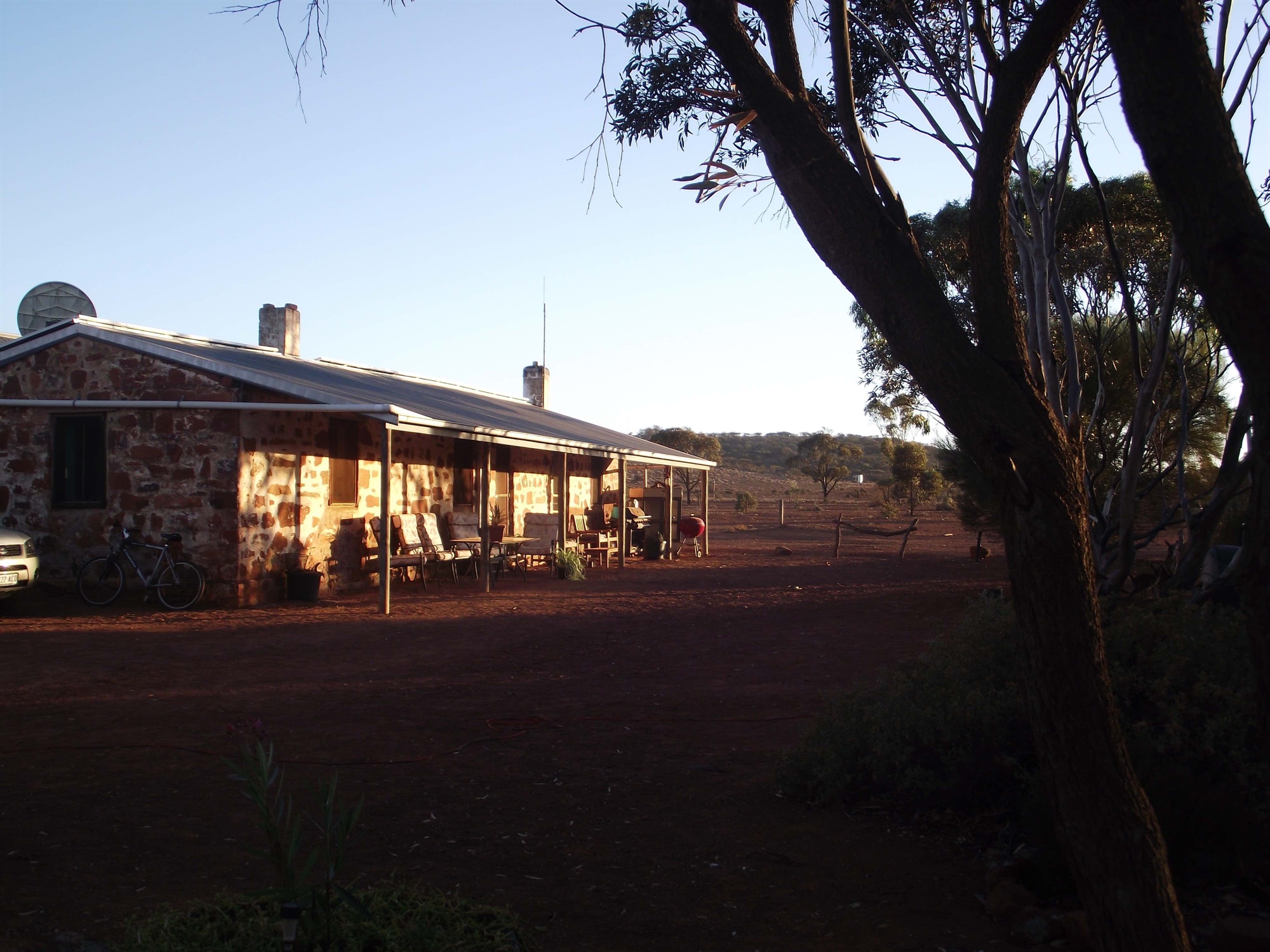 Lake Macquarie-based Brent Davison is a veteran motoring journalist with a love of bicycle riding.

A multiple award-winning writer, he has also been involved with motorsport and, odd as it might seem, spent much of his adult life breeding and exhibiting dogs with his wife, Maree.

He has been heard, too, guesting on several Newcastle and Hunter Valley-based radio stations discussing everything and anything to do with cars.

These days Brent divides his time between cars, bicycles and travel, writing about all three.